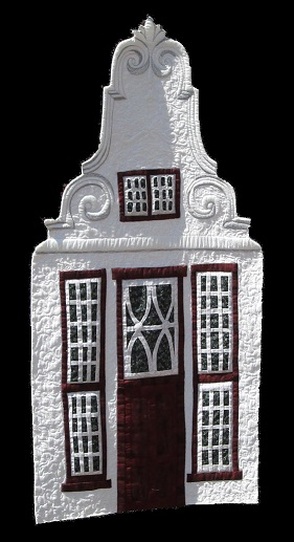 The typical architectural style found in the Western Cape of South Africa during the 17th century, the early days of the Cape Colony. The houses have a distinctive and recognisable design, with a prominent feature being the grand, ornately rounded gables, reminiscent of features in townhouses of Amsterdam built in the Dutch style. The walls are whitewashed and the roofs thatched.

Most Cape Dutch buildings in CapeTown have been lost during the developments in the City Bowl during the 1960s. However, the Cape Dutch tradition can still be seen in many of the farmhouses of the Wine Route, and historical towns such as Stellenbosch, Swellendam, Tulbagh and Graaff-Reinet.

This unusually shaped art quilt uses dense free motion quilting to highlight the curves and shapes of the decorative walls of these beautiful historic buildings. Traditional needle turned applique was used to add the door and window details.